“Bárbara Padilla is a singer who embodies the essence of grace, class, and refinement.”
— Arnfield Cudal

As a very young child in Guadalajara, Mexico, she was unable to resist the pull of her mother’s impressive collection of classical music albums. Bárbara officially resolved to become a singer in high school and later enrolled in the program at the School of Music of the Universidad de Guadalajara, where she excelled both as a musician and an academic.

However, she was diagnosed with Hodgkin’s Lymphoma and ended up going to the MD Anderson Cancer Center in Houston for diagnosis. While there, she auditioned at the University of Houston’s Moores School of Music and was offered a full scholarship on the spot. After several rounds of aggressive chemotherapy and radiation which doctors feared would damage her vocal cords, they predicted that she would never sing again. But after a life-saving bone marrow transplant, astoundingly, the quality of her voice was unaffected.

After completing her Master’s degree in 2004, Bárbara earned several roles with various opera companies and began teaching voice. Opportunity led her to audition for America’s Got Talent in 2009. Her spectacular performance of Charles Gounod’s “Ave Maria” prompted judge Piers Morgan to declare it “the best vocal performance in the history of the show.” Bárbara’s luminous rendition as well as her charisma and determined pursuits made her a fan favorite, and she finished first runner-up. 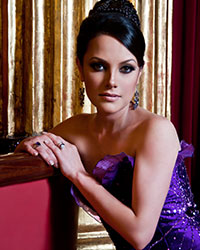 Bárbara says that her affliction with cancer and finishing runner-up are some of the best things that have happened in her life, and have made her into who she is today. “God is in control, and we are in his hands. We can only do what we can and He will give you the strength to go on. I never imagined that I would get this far, so everyday I’m given, I am grateful.”

She recently released her self-titled album “Bárbara Padilla” in 2014 with Moon Moosic Records. Fluent in Spanish, English, Italian, and French, she performs at symphonic events, concerts and recitals throughout the United States, Italy and Mexico. Her repertoire spans beloved operas such as La Boheme, Turandot, Tosca, Madame Butterfly, La Traviata, to Verdi’s and Mozart’s Requiem Masses and other masterworks including Beethoven’s Ninth Symphony, Joseph Haydn’s Nelson Mass and Carl Orff’s Carmina Burana. Her versatility has allowed her to excel at “popera” singing favorites such as “Time To Say Goodbye,” “Gira Con Me Questa Notte,” Alfonsina y El Mar” and others.

Bárbara Padilla has commenced her national tour and is now available to sing in gala events, symphonic concerts, churches, and any public or private venue in South Florida.